I’m combining 2 weeks again because I had to miss week 13’s practice. Super sad! A friend of mine and I always go to Amsterdam for International Pillow Fight Day and we have recently started spending that night away (since the kids have gotten bigger). I was planning on making it back for practice (I even had my bag packed and by the door) but I just didn’t make it. I was so tired after a very sleepless night and my kids would have never let me leave immediately after I had been gone over night. I could have snuck in and grabbed my bag and made it to practice but I knew that the next day when my son woke up and had to go to school it would be an issue. I’m not letting that missed practice bother me, much. I kinda anticipate have to retake Fresh Meat anyways.

Our homework was to watch a bout on youtube. I watched 2. I got so frustrated with the first that I found another one hoping it was better. They kept changing the damn camera angles. I couldn’t follow the game or keep up with the penalties. I got so frustrated I kinda gave up. I say kinda because I kept the bouts running in the background while I drank wine and chatted on the phone. Perhaps being in the same room as Derby counts for something!

Some good came out of that frustrating evening. I was told that the RockCity Rollers were having their first scrimmage of the year and that Fresh Meat and Smokey Bacon were welcome to come and watch. I was really excited to watch another bout in person.

The night started out a bit rocky. I sat in the stands and was completely alone. One of the players skated over and asked me who I was. I told her and she said ” Oh, OK. Welcome” then skated off and said to a teammate “I don’t know, she is English” (she said all of this in Dutch, of course). I wonder if she understood what I had said.

At this point I wished I had brought knitting. I felt very outside. I feel like this less and less now. But its a combination of not being Dutch, only passably speaking the language and being Fresh Meat that made me kinda wish I could blend into the bleachers. I wanted to be there, but not be “that weird English chick sitting alone in the corner” (and for those of you wondering: I am not, in fact English, I am American. But “English” is a generic term for anyone who speaks English).

Before the bout actually started one of the Fresh Meat trainers who was playing in the scrimmage skated over and told me that I was sitting in the wrong spot. I should be sitting with the other players and officials (and one random dog) in what is the Derby equivalent of a dugout. I was so grateful! I would have given her a hug if that wouldn’t have been weird, and she was on skates, and we were separated by a wall. You get the idea.

I changed locations and things immediately got better. People started talking to me! It was a shame I couldn’t stay till the end but I had Power Yoga at 9:00. Everyone was just starting to warm up a little to the “little English Girl”. I’m so glad I went. I was able to keep up with what was going on and the rules started to actually make sense.

I was surprised and a little sad that I was the only one from either Fresh Meat or Smokey Bacon to come. It would have been nice to have a group.

I spent a lovely Sunday afternoon studying the rules. I finally read the rule book from beginning to end. It a warm and sunny day and I was able to sit outside and read while the kids played. I have that scrimmage to thank for my ability to grasp the concepts finally. I was able to read the rules and the example situations and know what was going on. I’m very happy with that. I still don’t feel completely confident in my ability to pass the written test but I am getting much closer.

This was an extra practice. There was something going on that was preventing us from meeting but it got cancelled. I honestly didn’t really know any of that till a few days before. I am very glad we had a practice though, 2 weeks away would have been far to much!

This was a particularly fun one. The first half or so was like a boot camp. I love boot camp. I am a big fan of movement and pushing my body as far as I can and then a little further. I’m a bit nuts like that.

Instead of the normal fitness routine (boring) he just called out different things. All of them were the things we had been practicing like planking and squats but in a random order and repeatedly. It was so much more interesting.

Then we did some endurance training. This was seriously fun (in a deranged nut job way). We skated as fast as we could across half of the track then fell to a knee and spun around on our belly. In the end (if all goes well) we are laying on on our stomachs looking at the direction we came. When the whistle blew we jumped up and did it again. Back and forth for ages! Then we took a brake and didn’t it again.

At the water break I asked the trainer if we were doing more. He said “don’t hate me!” My response was  “It’s like boot camp. I love boot camps. I do this style of thing a few times a week”. If they really want to learn how to make us cry they should check out Body Pump at the gym! Goodness, I can’t even imagine what would happen if my favourite instructor was given a room full of people on skates and told to wear them out!

After that we went over the things that would be on the basic skills test. I fell on my butt jumping over the obstacle. I was told that we have to be able to jump over the cones stacked 3 high, if i had to guess I would say about 6 inches. It took some doing but I finally managed. Now that I have done it a few time I’m confident that I will be able to the day of the test.

I actually find my confidence growing more and more. Perhaps I can pass basic skills on the first go! I’m not pinning all my hoped and dreams on it, though. After all, I haven’t been on skates since I was a little kid. It would be unreasonable to expect me to master this level of skating in only 15 weeks at 2 hours a day. Still, would be nice!

We didn’t attempt our 27 in 5. I was told that this was because it was an “extra practice”. I was very sad! I was kinda using that as my way to judge progress. 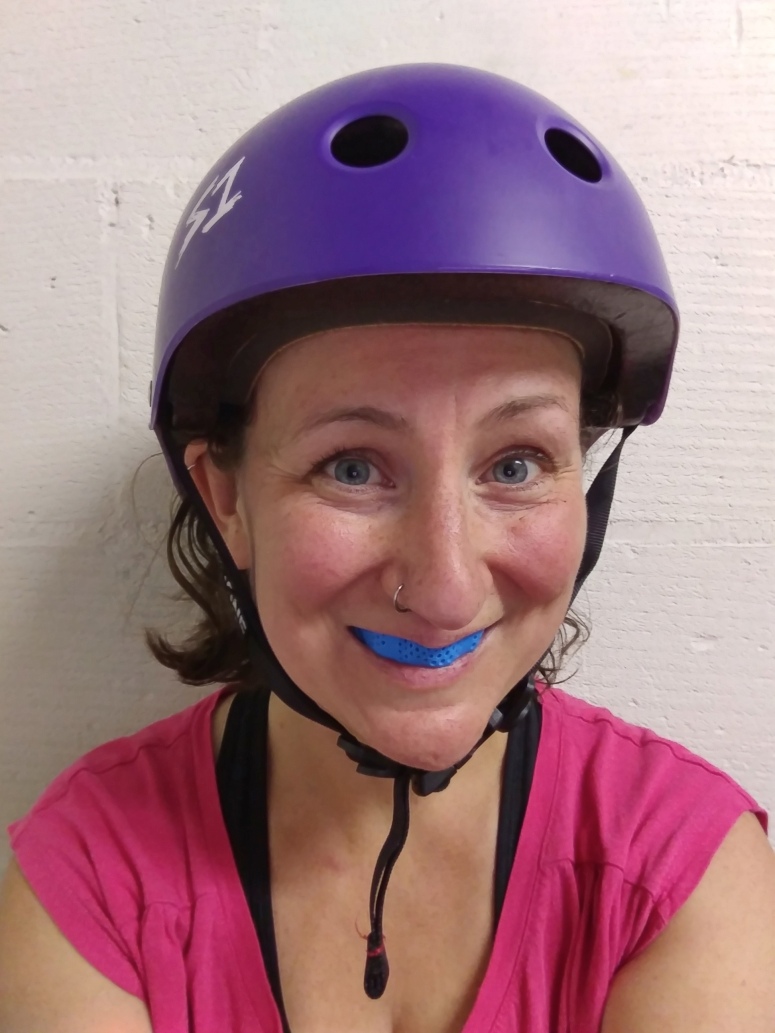