I almost called this “What a Difference a year makes” because, well, a year has made a huge difference in our lives here in the Netherlands. Of course a year makes a difference, right? Yes, I know. But I tried to take my kids to the Sinterklaasfest at Weverkeshof: Nuenen last year and it was a bit of a disaster. I rarely feel like a complete and total outsider in The Netherlands but on this day I did. I felt like a social failure and I was bringing my kids down with me. If you have ever lived in a foreign country you have had those moments. They suck. Luckily Weverkeshof is pretty great with or without Sinterklaas and the kids had a great outing. That day, one year ago, was saved by my kids ability to see the good in things but this year I was determined to do things differently. You can read about that day by clicking here: What I learned from my kids today

So what were the main changes?

Well, I messaged them and made sure we were going at a good time. This has been a huge step for me in the last year. My confidence level has grown dramatically. In the past I would have been unsure of my Dutch so I wouldn’t messaged them. I decided that if I felt unable to message them in Dutch I would do so in English. They will almost certainly respond in Dutch but thats what Google Translate is for! I mean, yes, I’m foreign. The reality is that they don’t really care.  I just want my kids to have a fun outing, just like they do.  It took me ages to realise that it’s OK that I am here, Dutch or no Dutch.

But speaking of my Dutch, it has also improved dramatically. I have been taking classes for the last year and I am overall pleased with my progress. Pretty much I can ask for things and if someone speaks to me I can generally understand them and sometimes even respond appropriately (although often in English) instead of standing there looking like a deer in headlights.

I have also decided to embrace the the Dutch. Instead of being pushed around and out of the way because Dutch people seem incapable of standing in a line properly, I shove with the rest of them. A beer in the middle of the afternoon at a kids event? The old me cringed but looking around I noticed a great many adults enjoying an adult beverage and why not? It definitely made the day better! My kids screaming at each other in the middle of the room about who had control over the red crayon? Yep, I have learned that kids will be kids and they all act like crazy little monsters sometimes. Not a huge deal and my ability to stay calm and smile is way more important then their ability to do so.

The Dutch just seem more relaxed than where I came from. It’s awesome.

I was amazed at how differently everything went. We had a really great outing.

The Sinterklaasfest at Weverkeshof: Nuenen takes place between the intocht (the arrival of Sinterklaas in the Netherlands) and Dec 5 ( the night he delivers presents). During that time this great little farm is transformed into a Sint residence. His room is set up so kids can actually see where the man is sleeping while he is in town. There are also rooms set up for his helpers Zwarte Piet and a toy wrapping room (where the magic happens)! Children can meet and sit on Sinterklaas’s lap. He sings songs with them and interacts with each child. There is juice and pancakes and colouring. Music and dancing and kids having a great time. It was great. Everyone was so happy and having fun. It felt like a real community atmosphere. 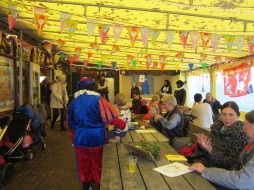 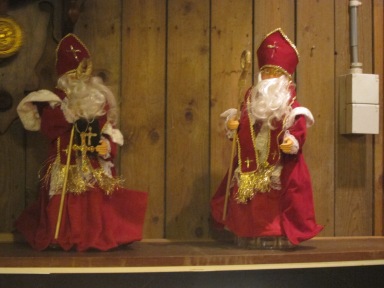 Weverkeshof: Nuenen is really great even without Sinterklaas. It is a working farm with chickens and goats and donkeys. They also have a really fun playground.

The kids had a blast. My son is now 4 and in school so he is very interested in Sinterklaas this year. He coloured Sinterklaas a picture and gave it to him. It was really sweet. Sint unrolled it and pointed out different things. His main helper put it in the naughty and nice book. My son was so excited! 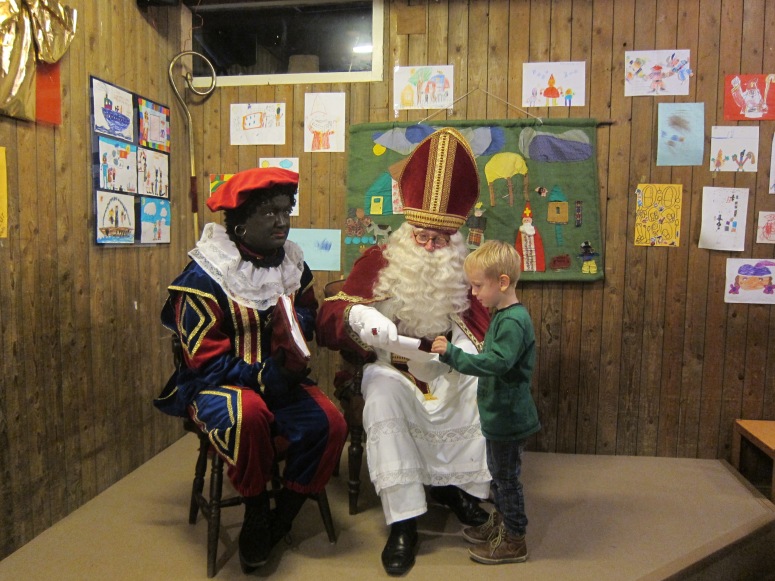 They coloured and played and ate pancakes. 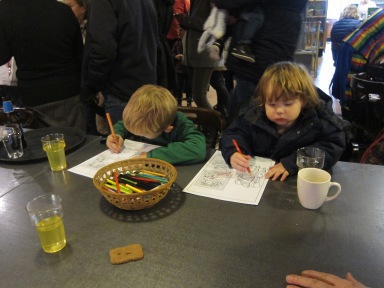 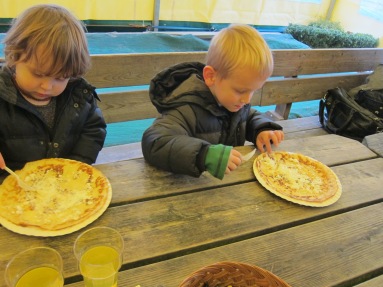 Did I mention the horse? Sinterklaas travels by horse while staying in The Netherlands, it’s name is Amerigo.

This isn’t the only “residence” around. I hope to take the kids to a few more before the 5th. My son will love it and I am really enjoying watching him experience Christmas this year. This is the first year he has had a real understanding of what’s going on and it’s so much fun!

Go check it out. You won’t be sorry!

Want to know more about Sinterklaas and Christmas in The Netherlands?

Christmas in The Netherlands – Part One: Sinterklaas is coming to town!!